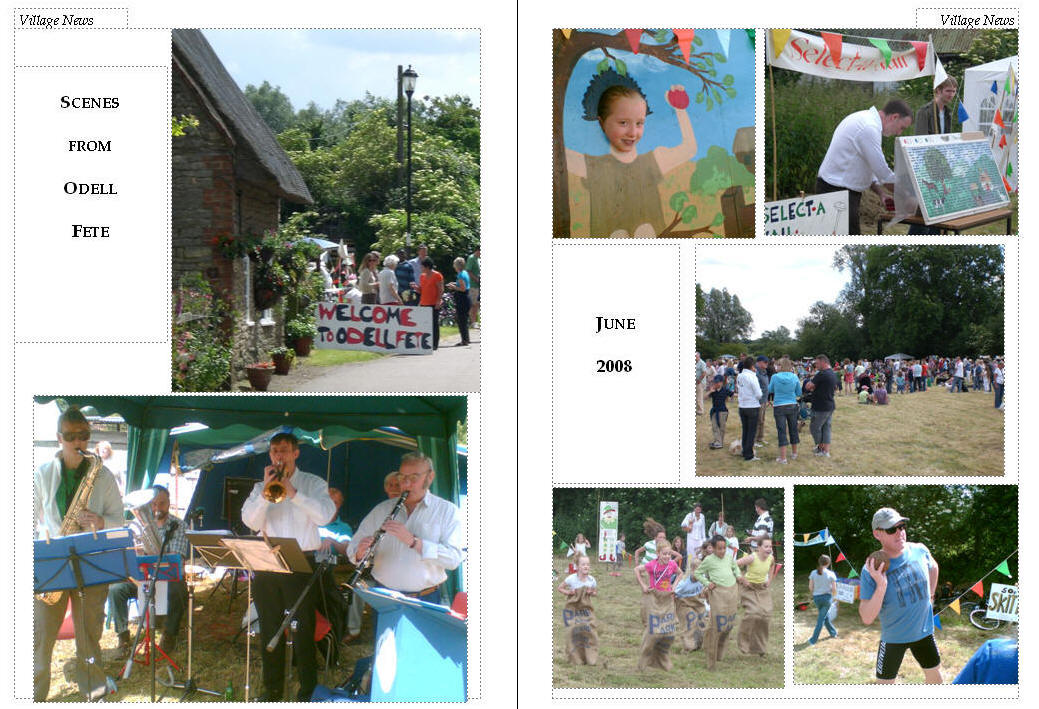 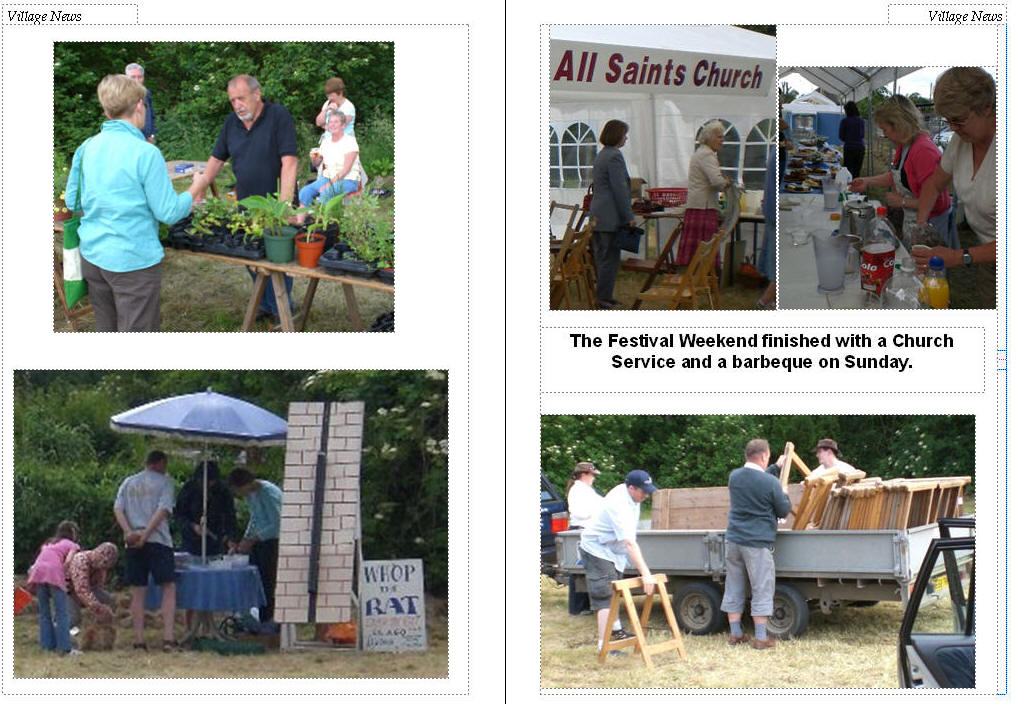 Happy birthday to;  Miles Tringham on  24th August……and to everyone with a birthday in July and August.

Round and About - The Overseas Connection

Thinking about Odell and its long history I was struck by how often this village has been touched by people and affairs from overseas.  This village, especially in bygone days, was a small, isolated community and yet the finger of fate has touched us time and again.  Let me take you on a walk through a slice of Odell's history.

In the 1970s that part of the parish of Odell now known as the Country Park was being excavated for sand and gravel, when the remains of a Romano/British farmstead were uncovered.  The farm appears to have lasted for about 400/500 years.  The original site is in the area in front of the ranger’s lodge/tea rooms but is now covered by water.  As time passed the area of the farmstead extended down towards Odell village.  At the time of the Roman invasion the farmstead was well established and the inhabitants seem to have happily adopted the Roman lifestyle.  Roman pottery has been recovered, together with a few pieces of Roman armour.  A short section of Roman road has also been discovered crossing a corner of the parish.  The farmstead fell into decline on the departure of the Roman legions.

The farm began to prosper again on the arrival of the Saxons, when they moved on to the farmstead.  They dug a number of pits and wells into which they seemed to throw much of their rubbish - which has now been recovered.  Odell also witnessed the arrival of the Vikings when the River Great Ouse formed the boundary of Danegeld.  The burial of a Viking warrior was unearthed in Harrold and two Viking burial sites were found in the Odell area containing human remains.  At some time during the Saxon period the village of Odell made its first appearance.  Later a fortified building was built on the small promontory where today The Castle stands.  This was an important Saxon stronghold occupied by a Thane of some importance.  At the time of the Norman invasion this position was held by Levenot whose territory extended well into Northamptonshire.  What happened to Levenot I have not discovered although as a Thane it was his duty to turn out in support of his King in times of war.  Whether he died on the battlefield or survived to fly the country I do not know.

After the success of the Norman invasion Odell fell into the domain of William I who appointed Eustace, Earl of Bullion (later spelt Bulloign) to oversee the general area and shortly thereafter the parish was passed into the keeping of Walter Flandrensis (Walter the Flemming).  The first mention of Walter was in 1068 and it seems likely that he accompanied William when he fought at the Battle of Hastings.  Walter later adopted the title Walter of Wahull, Lord of Wahull (the early spelling for Odell).  Walter started to build Odell Castle and this building work continued over several generations until the castle came to be of considerable size.  The Wahull family were also responsible for financing the building of our present church.  The title passed into the female line in the 1400s when the castle was deserted and fell into ruin.

The Saxon influence returned to Odell in the 16th century when Thomas Alston of the Inner Temple first rented and then bought the remains of Odell Castle and the surrounding estate which more or less consisted of the entire parish.  The Alston family originated in East Anglia and were of Saxon origin.  The Alston family held the estate until 1934.

Peter Bulkeley, a Rector of this Parish in the 17th c., fell foul of the rulings of Archbishop Laud.  His non-conformist ways led to Peter Bulkeley, together with his family and a number of his supporters leaving the country to make a fresh start in the New World.  In 1635, shortly after their arrival in Boston, the party moved inland to found the town of Concord, Mass.  Both Peter and his son Edward took on the office of Minister for the new settlement.  Over the years the town was to flourish, taking part in the War of Independence.  In this connection they founded the Concord Minutemen, a group of volunteers who held themselves in readiness for instant action, proudly claiming they could be ready for action in one minute.   In 1983 the re-enactment group of the Concord Minutemen visited Britain and took the opportunity to visit Odell for a day of celebrating their "roots" and meeting the present-day residents.  The celebrations included a procession in costume from Odell Church to the Village Green followed by a demonstration of ceremonial drill - this was accompanied by a similar display by a Troop from the Sealed Knot.

Odell castle pre fire: how it may have looked at the time of Sir Rowland Alston

In the 19th c. Mr. Guy Repton rented Odell Castle together with his wife Lady Jane Repton.  I claim the overseas connection in this instance on the basis that Lady Jane held her title in her own right as she was a daughter of the Duke of Leinster (an Irish family).

The Rector of this Parish at that time was Charles Searle and he, together with Mr. Repton, most definitely maintained the overseas connection.  Charles Searle came to Odell in 1856 and remained until 1864.  On his arrival he was deeply shocked by the poor living conditions of many of the cottagers and he began to encourage the young men of the village to move overseas to make a fresh start in the New World, assisting many by paying for their passage.  In this he was financially assisted by Guy Repton.  From surviving correspondence he encouraged our young men to a life in New Zealand, Australia, Canada and the United States, a number of whom went on to considerable success.

Lastly I come to the late Lord Luke.  The Lawson Johnston family founded the Bovril company which was originally called "Johnstons Fluid Beef" and as a young man the late Lord Luke was sent to Australia and South America to learn the beef industry.  His father George had purchased Odell Castle together with the estate in 1934 and upon his father's death the late Lord Luke took over the company, and the building up of the Odell estate.  He was also a member of the International Olympic Games Committee, travelling the world, and priding himself on having never missed an Olympic Games during his nearly 40 year tenure.

NOTE   If you wish to know more about the history of Odell copies of the "Millennium Book of Odell"- a thousand years of Odell History at Ł10 a copy - are available from Barbara Corley, Horsefair Lane and Brian Cheadle, Rectory Farm or County Town Books

Wodehill Jazz Band at The Bell

The Wodehill Jazz Band will be entertaining in the garden of The Bell – weather permitting – on the following Fridays, at 7.00pm:

Odell Luncheon Club invites you to a strawberry tea in Jim and Doreen Wheeler’s garden:

All senior citizens are invited. - Please let Jill Cheadle (720261) know by Sunday 6th July if you wish to come.

On Tuesday July 8th. We will be trialling the Stepping Out walk. Walkers need to be outside the Bell at the earlier time of 7.00pm.  Non walkers will be contacted by phone before the event and will be taken up to the Rectory, if they require transport, or should arrive at the Rectory from 7.30.

Christine has kindly offered to host the event and lawn games will be available.  The walkers expect to start returning from 8.00.  It will be a bring and share picnic.  Walkers can either carry their contribution with them or deliver it at an earlier time to the Rectory.  Any queries please contact Lynette or Rachel.    Rachel Halton 720572

Climbing Tower in The Country Park

The Parish Council has arranged for a climbing tower to be in the Country Park on Monday 28th July, from 10 am to 2 pm at the Harrold end of the Park.

A SONG OF SUMMER

Now the fields are full of colour

Now the grazing flocks are shorn

How we’ve longed for green and yellow

How we’ve thought of evenings mellow

How we’ve dreamed of Summer’s breeze

Even now when days are warmer

Even now as with one voice

Even now let’s all rejoice.

Fishing has started again.  You need to join Vauxhall Angling Club and you can get your fishing membership card from Trevor, the fishing bailiff, who is at the Park each day.

Walking Sticks - Carve your own personalised walking stick from materials found in the Park.  Make it just the right height and hand hold for yourself.  All materials provided.

No need to book for this session.  Just come along.

Bring a torch and dress appropriately.  It may be hot, cold or wet! Under 16s must be accompanied by an adult. Please register for this event as numbers are limited.

Speak to us if you have a group of children and want something different for them to do for a party or in the holidays.  Adult groups welcome as well.

Conservation tasks.  Come and join in with practical work to enhance the park for wildlife and visitors on the following date:

Monday 28th July 10am – 3pm.  Wear appropriate clothing and footwear.  Drinks provided.  Come for an hour or two or stay for as long as you like.

The Friends’ Annual General Meeting is on Thursday 3rd July at 10am in the Visitor Centre.  All welcome.

Forthcoming events to look out for…

Waste Paper Collection - Thank you for bringing your waste paper to the bins. Though the return is small, every little bit helps financially and of course the waste is recycled.

Do please support our events, and do suggest to us your ideas for alternative activities. Rob Lee (720730) on behalf of the Village Hall Committee.

This wonderful play by Thornton Wilder set early in 20th Century, is an American Classic, in three parts.  A delightful, heart-warming and fascinating study in character development and the community life of this period, you will follow the townsfolk of Grover’s Corner through several years, as they come to terms with their changing society, the joys, the losses, the griefs…... as seen through the eyes of the host of the play, the stage manager.

‘Whenever you come near the human race, there’s layers and layers of nonsense’. Intrigued?

Tickets will be available from Tues. 26th August

Booking for our spectacular, traditional pantomime for the whole family, on stage Friday 5 - Saturday 13 December, with matinées on both

Saturdays, will be available during Our Town, only at The Mill Theatre.

10% discount for parties of 10 or more (excluding Charity performances).

Do you fish The Great Ouse for Chub – Barbel – Perch – Roach – Pike?

The Mill Theatre Island and Fishing Rights are owned by the

Sharnbrook Mill Theatre Trust. Fishing from the banks is for Members Only.  Annual Trust Membership to include Fishing is just Ł25.00 pa.

Please send all entries for the September 2008 magazine to Tricia Hudson (mag1 at odellbeds.net) or Catherine Corkery by August 12th 2008 at the latest.  May we remind you that the editorial team exercises the right to edit, shorten or alter any items that are submitted.  Also, the opinions expressed in the articles are those of the contributors and are not the responsibility of the editorial team. 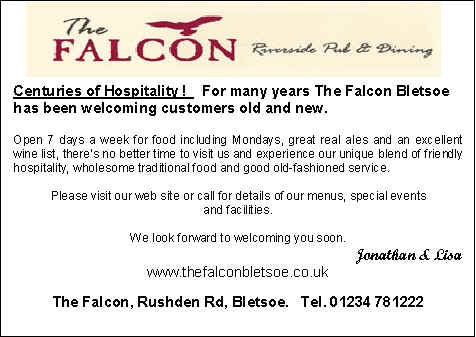